Anatomical and biological studies have revealed impressive evidence in support of TKM®. Nevertheless, the most compelling evidence continues to be the personal restoration of thousands of people who have used the method to overcome many different afflictions and restore their health.

Discoveries through Physics Are Leading Us Into The Medicine of The Future!
A Health Recovery and Preventative Medicine Education Resource Presents
TKM®
Extraordinary Alternative (Natural) Medicine for Extraordinary Results
The fields of standardized and integrative medicine are becoming more enthusiastic about recent developments in classic and quantum physics which offers NEW HOPE for addressing a wide range of illnesses from the Common Cold to Chronic Disease.
The discoveries Include Promoting Physical Fitness and Improving or Restoring Emotional and Mental Health.
More Leading-Edge Medical Physicians and Health Professionals are saying this will or should be
The Medicine of the Future!
Many are discovering "TKM®" is rapidly becoming the Medicine of the Present!
"TKM® (The King Method) is a totally non-invasive method administered with absolutely no repercussions noted. Many Americans are now embracing the understanding of the bio-electrical systems in the body. These systems have been known and utilized in Main Stream or Conventional Medicine in some aspect for a several centuries. Through recent research, a much greater understanding of this bioelectromagnetic system in the body and the importance of it's proper functioning for human health in a variety of ways.
The beginning of truly understanding this electrical energy scientifically, began with a physicist named Nikola Tesla. Since Tesla, there have been many great physicists including "Einstein" which have advanced our knowledge of the body's electrical energy system. Although, the medical community is just beginning to see the importance of the bio-electrical system, which many say supports every other system known in the human body. Cyril W. Smith (England) along with other well known physicists are dedicated to understanding more about this fascinating and important system within the human body. Let us present a few relations that are dependent upon the integrity of the bio-electromagnetic energy in relation to TKM®.
Return to top
Recent health news report: research on Energy-based medicine is revealing a source for health recovery, healing and preventative medicine unlike anything known before. TKM® therapists apply this hands-on method and say that anyone can apply it. Dr. King says, it is an integrative medicine approach first thought of in the East, for the Eastern culture to help the body heal through natural medicine. Termed by many as "Energetics, bioenergy, bio-electrical, bio-electromagnetic energy", which is not like, although has some similarities to, acupuncture or acupressure, except that it far exceeds their accomplishments. TKM® also provides first-aid help. This light hands-on body work is a natural wholistic approach and is a complimentary therapy taught in educational/training seminars and lectures across the country and the world, exclusively by King Institute, LLC.
There are obviously more systems than can be listed.
Return to top
If you have any questions after searching our site, you may contact us.
Histology of the Energy Sphere
A Summary
There are consistently more than twice as many dermal papillae within the area of each Energy Sphere point in humans. The Fisher's Exact test and the one tailed t-test support these findings to be significant in relation to acupuncture points. It is logical to assume that the increased concentration of dermal papillae containing capillary loops with sympathetic wrappings and the contained nerve endings within the loci (center) of the Energy Sphere can account for the anatomical differences which are possibly responsible for increased conductivity found in the overlying epidermis (see Figure 2).
One biological discovery which presents scientific confirmation of the bio-electrical activity and reactions of the Energy Sphere is the release of methionine enkephalin, leucine enkephalin and â-endorphin by the peri-aqueductal gray matter responding to direct Energy Sphere and acupuncture point stimulation. This was found to be significant in clarifying the manner scientifically, in which pain can be reduced or eliminated from bio-electromagnetic energy stimulation.
There is increased electrical activity at the Energy Sphere loci (centers). The evidence of measurable, increased electrical conductivity (lowered electrical resistance) has been scientifically and medically well-established and published since 1959 (see Figure 1).
The Energy Sphere's ability to constrain or emit electrical activity has received many efforts to equate anatomical biochemical entities (existence) to the measurable bio-electrical activities within these known Energy Sphere loci.
Commentary
The scientific theories in the last 40 years developed by Western medicine has been understood by physicians in the East for centuries. The world's medical scientists and physicians are now beginning to confer with one another in search of how to help the millions of sufferers for which there has been no known answer in the West. Incorporating physics in the scientific medical community is the vital missing link in health recovery and preventative medicine for which we have searched.
Figure 1. Here is a brief outline of theories for electrical activity at energy loci.
Year
Researcher
Theories
1959
Ishikawa
Reflex changes in subcutaneous blood vessels lead to an increase in vascular permeability.
1971
Ionescu-Tirgoviste
Pressure sensitive points are due to an accumulation of "vegetative nerves."
1972
Woolley-Hart
Point activity is due to local micro-circulation which is under sympathetic control.
1974
Hameroff, S. R.
Energy-conducting junction of paths made of microtubules.
1975
Voll, R.
Points are condensations of field forces formed by body energy generated by local mitochondrial energy cycles.
1977
Nakatani and Yamashita
Enlargement and osteal opening of sweat and sebaceous glands locally due to excitation of sympathetic nerves.
1977
Melzack, R.
Similar characteristics between "trigger points" and acupuncture points.
1977
Gunn, C. C.
Type I: Motor point
Type II: Sagittal plane focal meeting of superficial nerves
Type III: Superficial nerves and/or plexuses
Type IV: Muscle/tendon junctions
1984
Dung, H. C.
Points are found associated with the terminal ends of superficial cutaneous nerves.
Figure 2. Replica of a 100x specimen (the actual slide is below). 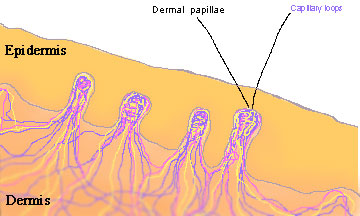 The electrical potential of Energy Sphere locations has demonstrated to be significantly higher than that of non-Energy Sphere location in human and animals. It has also been substantiated that the same energy loci bilateral have shown to be different, therefore revealing that there is also a difference between each Energy Sphere locations on the right and left of the body. The average range measures 9.65 FA to 11.16 FA electrical potential.
Energy Sphere stimulation therapy has been applied for pain and many disorders of the body. Studies have shown that internal organs such as the heart, blood vessels, CNS, stomach, brain, uterus, bladder and others systems react to Energy Sphere stimulation therapy. The wellness of the internal organs can be measured by the electrical conductivity of certain Energy Sphere loci on the skin that correlate to each organ and other various functions of the body. These correlations have been utilized in Eastern medicine for thousands of years.
Scientific measurements of the electrical activity found in the epidermis at energy loci began with the galvanic skin reflex as a measurement of emotion. Since 1953, Voll worked with the galvanic skin reflex in the measuring of the electrical potentials of the body for the purpose of diagnosing diseases. Voll felt that the energy loci represent condensations of field forces formed by body energy that is generated from the organic systems via the Krebs Cycle and oxidative phosphorylation of the respiratory chain carried out in the mitochondria.
Voll tested the energy loci over 100,000 times and has, by clinical and surgical confirmation, mapped out the exact correlative skin points and the representative anatomical site for each of the body's internal organs. The electrical conductance is related to biochemical processes occurring within the respective organs.
In 1977, Melzack demonstrated that the energy loci correspond to trigger points of muscles. A relationship was also reported of the electrical conductance at energy loci to local sympathetic tone resulting in the enlarging and opening of sweat and sebaceous glands. It has also been concluded that the mechanism of Energy Sphere therapy involves stimulating specific locations on the skin that evoke specific nervous system responses, especially autonomic nerve activity, which through biochemical means readjusts the function of the related internal organ.
Although there are many unanswered questions and more research to conduct, there is a substantial amount of evidence collected which provides credence to the relations and benefits of utilizing the energy loci in a non-invasive way which is crucial in addressing the rising amount of answered and unanswered human health issues around the world.
The honors for this study and the documented report belong to Dr. Thomas E. Croley, Ph.D.   Dr. Croley provided the actual slides and final reveiw and approval of this report in 1996. Most of these studies have been focused on acupuncture loci, which have shown to apply for Energy Sphere loci with little contradiction. The differences are found mostly in the form of application and a more comprehensive effect with Energy Sphere loci.  To see a copy of the publication of the original study - click here for the PDF.
Return to top
References